The earliest ancestors of the Kirghiz people, who are believed to be of mixed Mongol and Kipchak descent, probably settled until the 10th century around what is now the Tuva region of the Russian Federation. With the rise of the Mongol Empire in the 13th century, the Kyrgyz migrated south. They did not emerge as a distinct ethnic group until the 15th century. Various Turkic peoples ruled them until 1685, when they came under the control of the Kalmyks (Oirats, Dzungars). Islam is the predominant religion in the region, and most of the Kyrgyz are Sunni Muslims of the Hanafi school. 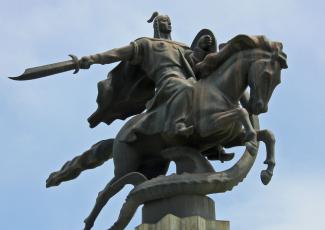 The legendary hero of the Kyrgyz is the subject of an epic which is longer that Homer's Iliad - which as well as telling the story of his life and deeds, gives us a graphic account of many aspects of the lifestyle of the nomadic Kyrgyz. The epic is recited by bards, called manaschi, and for many centuries the epic was handed down from generation to generation by word of mount. now there are several written versions in a number of languages.