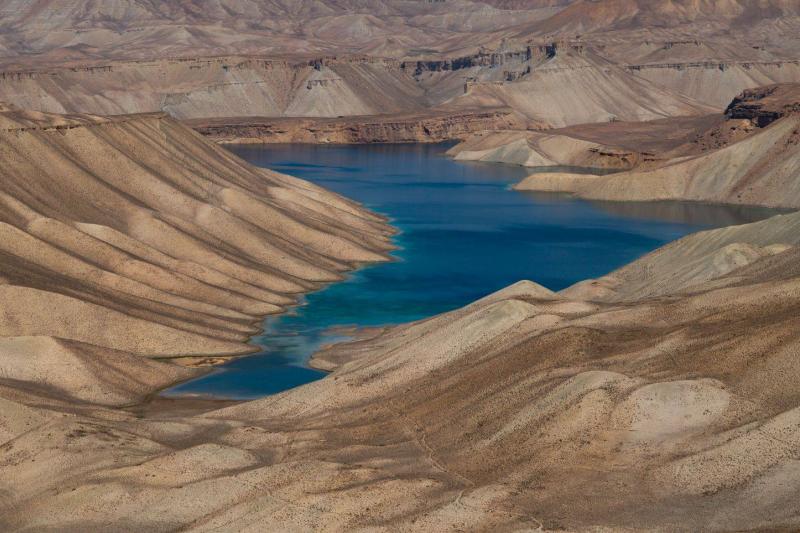 Of all the natural wonders of Afghanistan, the lakes of Band-e Amir are perhaps the most out-standing. Situated in the mountainous Hazarajat at an altitude of approximately 3000m, 75km from Bamiyan, these majestic blue lakes are of legendary beauty.

It is the country’s first national park, officially designated as such in 2009, and is home to six lakes that are most famous for their striking deep blue shade, a result of mineral deposits. The lakes are separated by natural travertine deposits, making it one of the world’s only travertine systems. It is framed by the Hindu Kush mountains, and acts as one of the centres of Afghan tourism. While the region provides a wealth of natural and agricultural resources, the opportunities for ecotourism mean that there has been a decrease in economic dependency on these resources. 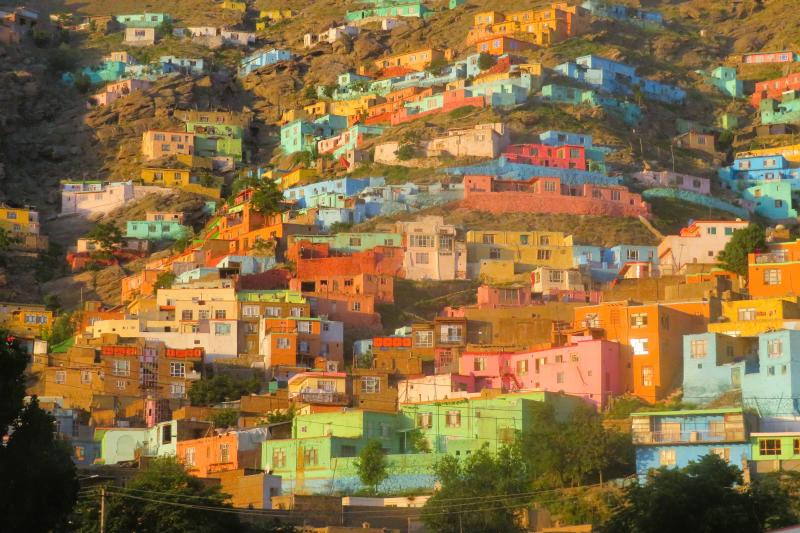 Kabul is the capital and largest city of Afghanistan. It has a population of around 4.5 million people and is located in the eastern part of the country, at the foot of the Hindu Kush mountain range.

Kabul may have originated under the Achaemenid Empire as early as the 6th century BC. Since then, the Kabul region has been a crossroads between India, China and the West. But also a crossroads of cultures and religions. Its history is rich, and in 1504 it became the main capital of the Mogul Empire.
The most important monuments of the city are the fortress of Bâlâ Hissâr which finds its origin at the time of Turki-Chachis; the garden of Babur and his tomb; the white marble mausoleum and mosque of Châh Djahân; the mausoleum of Timour Châh built in the garden of Châhar Bâgh; the former royal palace; the palace of Bagh-e Bâlâ; the Djâda-e Esteqlâl mosque; the Mausoleum of Abdur Rahman; the palace of Darulaman (or Aman) and the mausoleum of Jamal ad-Din al-Afghani.

Kabul has also been heavily affected by the passed conflict in Afghanistan, and has seen much destruction and violence in recent years. Despite this, the city is still home to a vibrant and resilient population, with a strong sense of community and a rich cultural heritage.

It is also a good starting point for excursions to the surrounding countryside, such as to the historic city of Bagram and the Panjshir Valley. 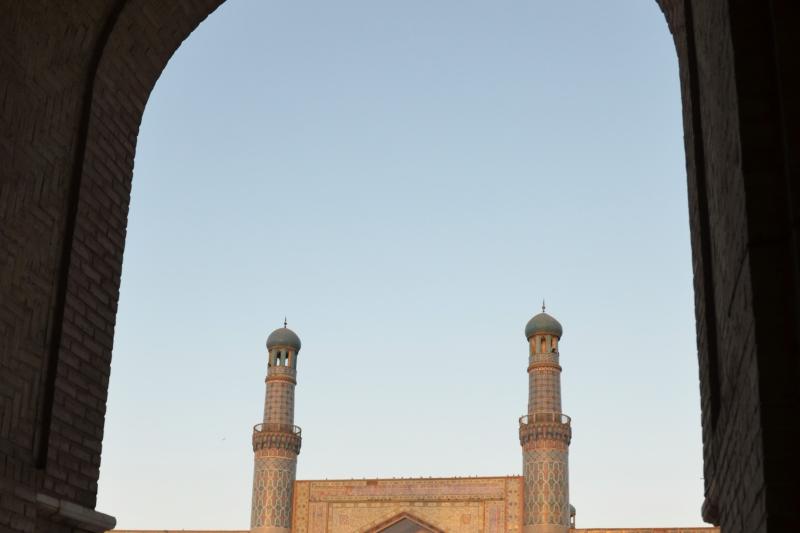 Herat is a city located in western Afghanistan, near the border with Iran. It is the third-largest city in Afghanistan and the capital of Herat province. It is known for its rich history and cultural heritage, and is often referred to as the "heart of Afghanistan" due to its central location in the country.

The Old City of Herat has a long history of rebuilding and restoration, having been destroyed twice by the Mongols and rebuilt as the capital of the Timurid Empire in the 15th century. The city's position along the Silk Road between Europe and Asia made it a desirable target for conquerors and occupants, leaving behind a blend of architectural styles and cultural influences. The Old City is a traditional Islamic urban center, and features notable landmarks such as the Qala Ikhtyaruddin citadel and the Masjid Jame Friday mosque, known for its bright blue minarets. Although the original defensive earthen walls surrounding the town have disappeared, the layout and much of the historic fabric remained intact until 1978.

Today, Herat is a bustling city with a population of around 400,000 people. It is an important center of industry and commerce in Afghanistan, and is home to a number of universities and research institutions. The city has a diverse population, with ethnic groups such as Tajiks, Uzbeks, Pashtuns, Hazaras and Balochs. The city has a rich culture with many traditional bazaars, museums, and festivals. The city is also known for its traditional crafts, particularly its textiles and ceramics.

The Great Mosque of Herat

The Jami Masjid, Friday mosque, also known as the Great Mosque of Herat, is a significant historical and architectural landmark located in the Old City of Herat, Afghanistan. It is one of the oldest and largest mosques in the region and is considered a masterpiece of Islamic architecture. The mosque was built in the 12th century and has undergone several renovations and restorations over the centuries. It is well-known for its bright blue minarets, which are adorned with intricate tile work, and its large central dome which sits above the prayer hall.

The Friday mosque is one of the most iconic landmarks of Herat, its blue Minarets are one of the most recognizable architectural features in the city, and it is a must-see destination for anyone visiting Herat. It is an important example of Islamic architecture and showcases the rich history and cultural heritage of the city. 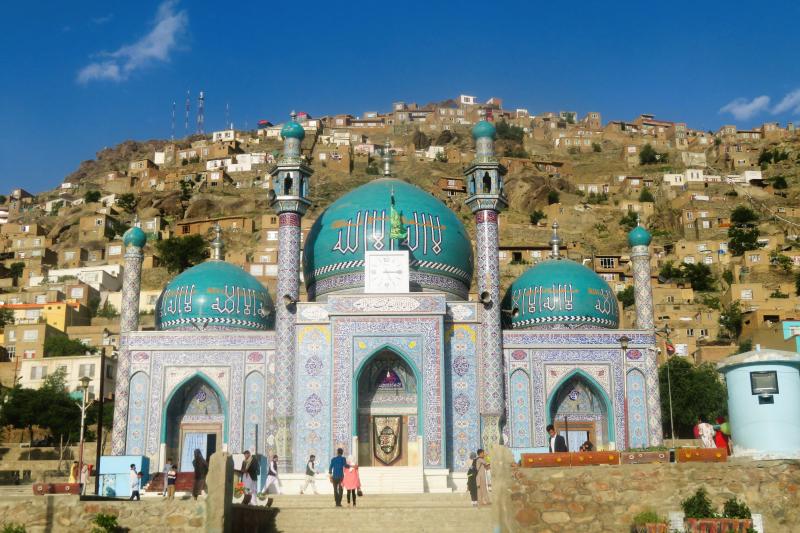 The mosque Rawza Sakhi Shah-e-Mardan, also known as the Rawza-e-Sakhi Shrine, is a historical mosque located in the city of Kabul, Afghanistan. It is named after Sakhi Shah-e-Mardan, who is believed to have been a companion of the Prophet Muhammad. The mosque is said to have been built in the 18th century, and it is known for its intricate tilework and calligraphy. The mosque is a popular pilgrimage site for Shia Muslims, and it is also considered a significant architectural and historical landmark in Kabul. Some stories say that it's a place for miracles and blessings. 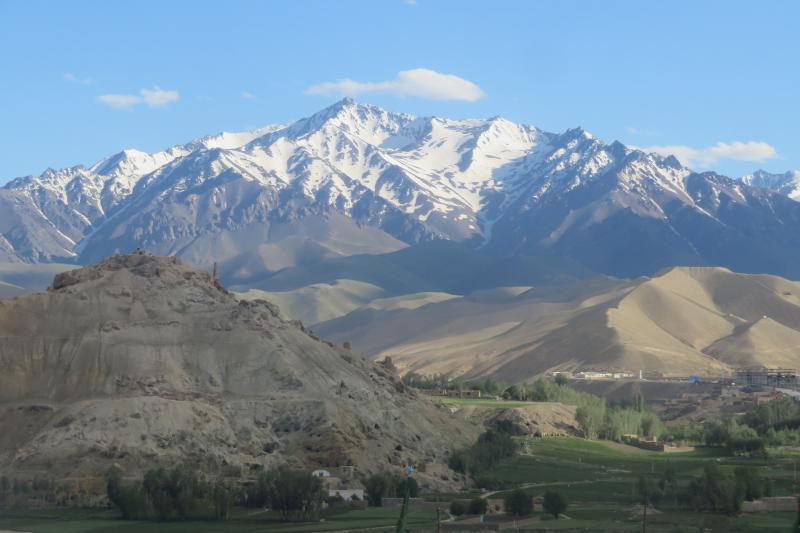 Bamyan is a city located in the central highlands of Afghanistan, in the Hazarajat region. The city is situated in a valley at an altitude of 2,500 meters and is surrounded by towering cliffs and snow-capped mountains. It is the capital of Bamyan province and is known for its history, culture, and natural beauty.

Bamyan is an ancient city, with evidence of human habitation dating back to the 4th century BC. It was an important city along the Silk Road and was a center of Buddhism from the 2nd century BC to the 7th century AD. The city is also known for the destruction of the two monumental statues of Buddha carved into the cliff face, which were dynamited by the Taliban in 2001.

The city is also a UNESCO World Heritage site and home to many other historical and cultural landmarks, such as the Bamyan Buddhas, the Citadel of Bamyan, and the Shahr-e Gholghola (City of Screams). Bamyan is also known for its natural beauty and is a popular destination for trekkers, hikers, and nature enthusiasts. The province offers a unique blend of history, culture and natural beauty. 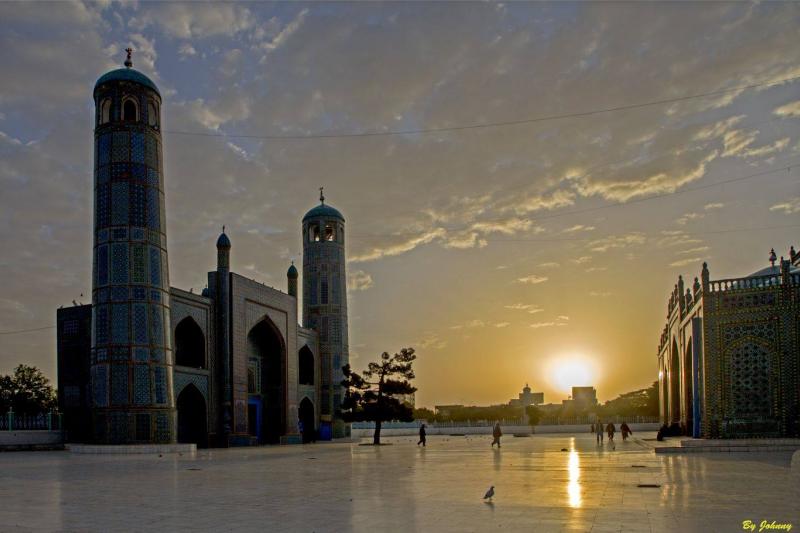 The Blue Mosque is the center of all the social and religious life of the city. It would be built on the tomb of Ali ibn Abi Talib, relative and companion of the prophet Mohamed. The Sultan of the Seljuq dynasty, Ahmed Sanjar (1118-1157), built the first known shrine at this location. It was destroyed during the invasion of Genghis Khan around 1220. In the 15th century, Timurid Sultan Husayn Bayqarah Mirza built the current Blue Mosque here. The shrine is surrounding by Rawza parks.