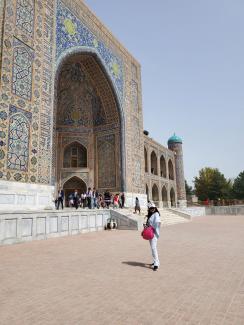 Instruction for tourists in Uzbekistan

Uzbekistan is the most touristic country in Central Asia and you will feel safe. They speak Uzbek, Russian, and few people speak English.

The majority are Muslim, but you don’t have to have a particular dress code. In Tashkent, one feels like in Europe, but in the countryside religious traditions are better respected.

It can be very cold in winter and very hot in summer. Spring and autumn are the best seasons to explore this huge country.

In hotels, you will receive a "registration card". This is a receipt that shows the number of nights you spent at this hotel. When you leave the country, you will have to show them to the immigration officers.

The Uzbek people are a friendly and forgiving people, especially for foreigners who are not necessarily familiar with local customs. However, some knowledge about the host country’s culture can help you be respectful and make friends during your trip.

THE THINGS TO DO:

- Take off your shoes to enter a mosque or house.

- Respect seniors by giving them the right of way and the first seats on buses, tables and near tourist sites.

- Confirm rates with taxi drivers prior to taking the car to avoid paying more than you negotiated.

- Take permission to photograph someone before doing photo.

THINGS NOT TO DO:

- Leave the bread on the floor or place it on the table upside down.

- Blow your nose hard in public, it is considered rude.

- It is not customary to shake hands with women to greet, it is enough to greet verbally or to bow your head slightly.

Uzbekistan is a friendly country and you will love it!