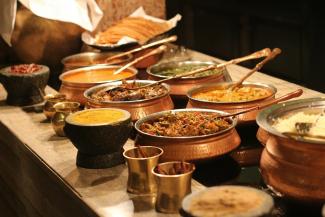 Pakistani cuisine can be characterized by a blend of various regional culinary traditions from South Asia and West Asia, as well as elements of its Mughal heritage. The country's different cuisines are derived from its ethnic and cultural diversity.

Biryani, Palau and Nihari are very popular. Pakistani cuisine is a collection of rich and exotic dishes From the spiciness of the Qurma to the sweetness of the Kheer, every meal in Pakistan is an integral part of the journey. However, Pakistani cuisine still hides full of taste surprises

The majority of Pakistani cuisine, with roots in the eastern provinces of Punjab and Sindh, is generally characterized as “highly seasoned” and “spicy,” overlapping that of neighboring India. Conversely, the cuisine of the western and northern provinces of Azad Jammu and Kashmir, Balochistan, Khyber Pakhtunkhwa and Gilgit-Baltistan is described as "sweet", largely sharing its elements with India. , Bangladesh and neighboring regions of the Indian subcontinent and South Asia.