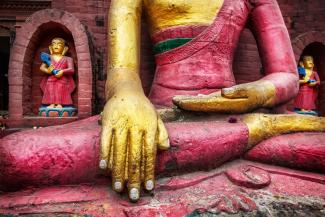 The history of Nepal has been influenced by its position in the Himalayas and its two neighbours, modern day India and China. Due to the arrival of disparate settler groups from outside through the ages, it is now a multiethnic, multiracial , multicultural, multi religious, and multilingual country. Central Nepal was split in three kingdoms from the 15th century until the 18th century, when it was re-unified under the Shah monarchy. The national and most spoken language of Nepal is Nepali.