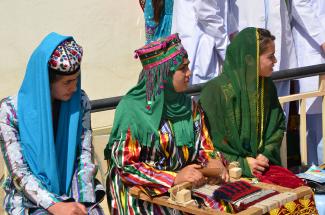 The culture of Afghanistan has persisted for over three millennia, dating back at least to the time of the Achaemenid Empire in 550 BCE. It is mainly a tribal society with different regions of the country having their own subculture. Almost all Afghans follow Islamic traditions, celebrate the same holidays, dress the same, eat the same food, listen to the same music, and are multilingual to some extent. Persian culture and architecture is still present. Some Zoroastrian festivals are still celebrated like the New Year "Navruz".

The Tajiks are heavily concentrated in the northeast, but also form large communities elsewhere, such as in western Afghanistan. The Hazaras tend to be mainly concentrated in the central region, while the Uzbeks are mainly in the north. In the southern and eastern region, Pashtuns live in accordance with Pashtun culture and are generally bilingual in Pashto and Dari.

Afghanistan has been the main crossroads of Central Asia, South Asia and the Middle East, which has greatly influenced its culture.